Welcome to this year's Master Class in Mathematical Physics students 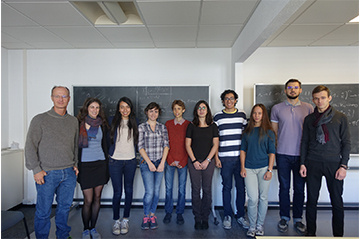 We welcome this year's Master Class in Mathematical Physics students and we wish them every success in this academic year!

Sofia is from Germany and did her studies in mathematics at the University of Bonn and Campus Pierre et Marie Curie at the Sorbonne University. For her master's thesis project she worked on random surfaces of high genus. Her interests lie in hyperbolic geometry, Teichmüller and moduli spaces, low-dimensional topology and geometry as well as global analysis.

Haihua comes from China. He graduated from Sun Yat-sen University in Guangdong Province with a Bachelor's degree in Mathematics and Applied Mathematics. He is interested in number theory and some mathematical models.

Dmitry comes from Russia. He was a prize winner in the Russian Physics Olympiad in high-school, he finished Moscow Institute of Physics and Technology with distinction before he got an Excellence Scholarship to study at ETH Zurich. Dmitry currently holds a Master degree in Physics from ETH Zurich. His research interests are in mathematical aspects of quantum information, statistical mechanics and condensed matter physics.

Vlad comes from Russia. He studied at the Moscow Institute of Physics and Technology where he received his Bachelor diploma with honors.  As a bachelor student, he contributed to two journal papers in Quantum Field Theory. Currently, his interests include theoretical research in statistical mechanics as well as other topics in mathematical physics.

Ilya comes from Russia. He obtained the bachelor’s degree at the Saint-Petersburg State University and works there at the Chebyshev Laboratory. He is studying problems related to complex analysis, probability theory and mathematical physics.

João comes from Brazil and is currently a PhD student in applied mathematics at the University of São Paulo. In his research and studies, he is mainly interested in statistical mechanics, more specifically on problems involving large deviation and phase transition on trees.

Tomas was born in Colombia and obtained his Bachelor's and Master's degrees from Universidad Nacional de Colombia, at Medellin. In 2018 he moved to the US to start his PhD at Johns Hopkins University. Tomas is interested in topology and its interactions with geometry and mathematical physics.

Claudia was born in Rome, Italy. She obtained the BSc in Physics from Sapienza University of Rome in 2018 and the MSc in Mathematical and Theoretical Physics from University of Oxford in 2019. Among her research interests are random matrices and applications of algebraic geometry to QFTs.

Ana was born in Ecuador. She obtained an Excellence Scholarship for her undergraduate studies. She received her Bachelor in Physics from EPFL. She is currently finishing her Masters in Physics at ETH Zurich, where her topic of research is BF Theory and Topological Gravity. While studying in Lausanne, she shared her passion for Physics and Mathematics via her work as a teaching assistant and President of the Young Physicists Forum, to inspire other students and support them with their studies.

Benjamin is from Germany and was educated at ETH Zurich and Imperial College London. He has a broad experience in research, beginning as an undergraduate researcher in black hole astrophysics. His interests evolved towards cosmology and in particular field-theoretic generalisations of gravity. Currently, he is concerned with the mathematical intricacies surrounding approaches to quantum gravity.

Tatiana comes from Russia and is currently a master student in physics at the St. Petersburg State University. During her bachelors work, she studied integrable systems at the Steklov Institute for Mathematics in St. Petersburg.

Pascale comes from Switzerland. She graduated from the University of Basel in Mathematics and Physics. Her main interests lie in algebraic geometry and topology.

Postdoc positions in the QFT and Strings group at ETH Zurich