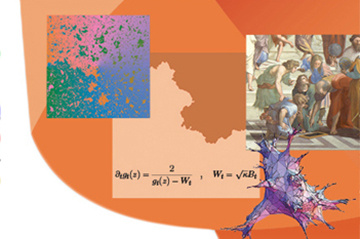 Description of the programme:

Amazing progress has been made in the understanding of planar statistical physics during recent years. The introduction of the Schramm-Loewner Evolution and the developments in the theory of random planar maps and lattice models enabled mathematicians to connect the rigorous approach to statistical physics with the traditional approach from physics based on exact integrability and conformal field theory. The goal of this programme is to provide courses on recent advancements in this field. More general courses on probability will also be provided during the first term.

The program is aimed at Master students, though advanced undergraduates and beginning PhD's are also welcome to apply. The participants will enroll in a one-year master program at the University of Geneva starting in September 2015, providing 60 ECTS credits. If they wish, participants will be offered the possibility of finishing a Masters degree from the University of Geneva by completing a Master thesis for 30 additional ECTS credits. A number of fellowships covering accommodation and local expenses are available.

For full consideration, candidates should apply before the 17th of January 2015 by filling out the following form:

Late applications will be considered subject to availability of resourses.

Questions can be addressed to the following email address.

The aim of this course is to introduce the students to the mathematical analysis of lattice spin systems. Several fundamental questions will be addressed and illustrated in the simplest relevant situations. Among others, the following topics will be covered:

The course will be based on an ongoing book, an early version of which can be found at http://www.unige.ch/math/folks/velenik/smbook/index.html.

This course will be devoted to the study of martingales and Markov processes, both in discrete and continuous time, with an emphasis on the interplay of the two objects. We will start with the theory of martingales, including inequalities, stopping time and convergence theorems. We will then study Markov processes, including state classification, invariant measures, and infinitesimal generators.

4. On various aspects of the dimer and planar Ising models (D. Cimasoni)

The aim of this course is to study the dimer (and to a lesser extend, Ising) models on 2-dimensional lattices, i.e. graphs embedded in surfaces. The focus will be put on the amazing variety of tools coming into play in this study, tools from areas of mathematics as diverse as combinatorics, algebraic geometry, and algebraic topology. We shall introduce these tools along the way when we need them, so no previous knowledge of these theories will be assumed.
More precisely, we plan to cover the following topics:

If time permits, we will use all of this to take a closer look at these models at criticality.

This class will be devoted to the proof of conformal invariance of several models of planar statistical physics, including the dimer, percolation and Ising models.

Building on the courses of the first semester and on some basic complex analysis that we shall first recall, we will give an introduction to the Schramm-Loewner Evolutions, and exhibit some of the relations between these remarkable random planar curves with the Gaussian Free Field, with the scaling limits of interfaces for critical percolation and for the Ising model, and with the uniform spanning trees.

The goal of this class is to present the theory of large random planar maps. Among others, we will treat the question of the enumeration of planar maps, of their local and scaling limits, and recent progress concerning their connection with Liouville Quantum Gravity.

This class is a continuation of the class "Introduction to statistical mechanics". Geometric representations have been used to study spin-spin correlations of spin models on lattices. These models include:

This course will be devoted to the study of these classical geometric representations and to the applications of these models to spin models.

A number of mini-courses including:

We will see how geometric properties of infinite graphs, such as isoperimetry, hyperbolicity and symmetry ( as well stationarity, which is random version of symmetry) are manifested in the behavior of random processes, such as random walks, harmonic functions and percolation, on the graphs.

This class is a continuation of the class "coarse geometry and random processes". We will discuss the connection between the properties of a group and of statistical models defined on Cayley graphs of the group.