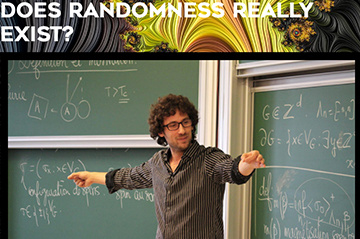 Hugo Duminil Copin (UNIGE) will be givning a Public Talk by on 2nd November UNIGE at 18:30 in the framework of the Wright Colloquium "The Art of Maths"

Attendance is on registration and presentation of the Covid certificate and ID. The conference will also be webcasted live.

The conference will be in French with simultaneous translation to English.

In the collective imagination, rolling die allows one to obtain an unpredictable result… But is this really true?

The movements of the hand and of the die follow the rules of classical physics, and the result of the roll can a priori be perfectly predicted. The unpredictable aspect seems to be due to a computational inability on the part of the observers rather than to an intrinsic randomness of the system. This realization is even more obvious when shuffling cards. Starting from a totally ordered game, it is possible to analyze the apparent disorder induced by shufflings of different qualities.

Through examples, we will see that some random events of everyday life are in fact perfectly deterministic, which leads us inexorably to question the very existence of chance. However, this doubt is only short-lived as the real chance is hidden elsewhere. In the infinitely small, where quantum physics replaces classical physics, the universe starts to play dice. The trajectory of an electron passing through a screen through a tiny hole cannot be predicted: two perfectly identical electrons entering the hole in exactly the same way will come out in different places.

Whether randomness is apparent, on a macroscopic scale, or real, on a microscopic one, it is essential to understand its fundamental laws in order to model it in the best possible way. This is where probability theory comes into play.

The lecture will be followed by a discussion, crossing mathematics and quantum physics knowledge, between Hugo Duminil Copin and Thierry Giamarchi. Professor Duminil Copin is a specialist in mathematical physics and probability theory, in particular in random graphs and ferromagnetism. Professor Thierry Giamarchi teaches physics at the University of Geneva. His research area is the study of the effects of interactions in quantum matter, as well as the effects of disorder in both classical and quantum systems.