Special prize for the Mathscope team at Science me! 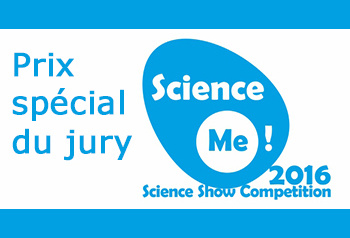 Congratulations to the Mathscope Team (Arnaud Ihne and Xavier Morvan) at Sience me! for receiving the Special Prize of the Jury!

Science Me! is the first European science show competition organised by the Chimiscope and the Museum of Science History during the Nuit de la science (July 9 and 10 2016) and supported by an Agora FNS grant. Under a large circus tent, 17 teams of young scientists from all origins and practicing all sciences competed under the form of 10-minute shows, in French or in English. The success of the demonstrations was measured by applausemeter, while a jury of neutral and independent scientists evaluated the quality of the shows on the basis of sound criteria (pedagogical and didactic aspects of the explanations, artistic and poetic dimensions of the presentations, fulfilment of safety regulations, interactivity with the public, simplicity vs. complexity of presented themes, scientific novelty).

The Mathscope team has presented the show "ça ne tourne pas rond!" on figures with constant diameter. The highlight of the show was a bicycle with wheels shaped as Reuleaux' triangle and pentagon, realized for Mathscope by the Atelier de mécanique de la Section de physique (UNIGE).

Dmitry Chelkak to give talk at the 7ECM