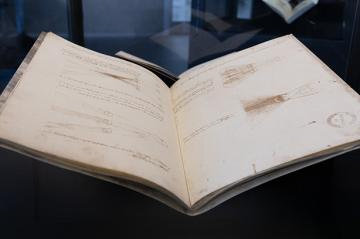 Almost a month after opening its doors to the public, we are pleased to announce the exhibition "Leonardo en Perspective" curated by our members Shaula Fiorelli, Joana Mailler and Pierre-Alain Cherix (UNIGE) to mark the 500th anniversary of Leonardo da Vinci’s death, has attracted great interest from the general public and press.

The exhibition has welcomed so far nearly 1200 visitors and ran 12 successful workshops & visits. So far nearly 100 people from all age groups and 5 school classes, have participated to these carefully planned University of Geneva Scienscope workshops.  "Leonardo en Perspective" has been covered by local and national media.

The exhibition is a wonderful opportunity to discover the less well-known aspects of da Vinci’s work. The moment visitors walk into the exhibition they are transported to his eclectic world and to his many contributions, not only by the variety of interactive themes exposed, ranging from earth sciences, music, mathematics, astronomy and anatomy but also by the manner in which they are exhibited. The curators have decided there would be no particular order or structure for the visit, reflecting thus, Leonardo’s understanding of the world and of his many interest and talents.

“Leonardo en Perspective” will be opened until February 20th at the University of Geneva’s exhibition room.

The post on the exhibition was amongst the top 3 highest performance in UniGE’s Facebook, reaching 25,700 people and on UniGE’s LinkedIn reaching 22,905 people. The post was also taken by the official Ville de Genève social media. Read more

The next ZGSM Forum for math graduate students and postdocs